The key decision-making body in the Federal Reserve System is the Federal open Market Committee (FOMC). The 12 voting members of the FOMC include the seven governors plus five of the presidents of the regional Federal Reserve Banks. This key. group controls the single most important and frequently used tool of modern monetary policy-the supply of bank reserves.

At the pinnacle of the en tire system is the Chairman of the Board of Governors, currently an economist,
Alan Greenspan. He chairs the Board of Governors and the FORMIC, acts as public spokesman for the Fed, and exercises enormous power over monetary policy. Because of his long tenure (first appointed as Fed chairman in 1987) and successful management of the economy, Greenspan is often called the “second most powerful individual in America,” reflecting the extent to which he can influence the entire economy through his impact on monetary policy, 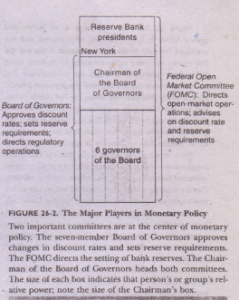