We see that some income comes from interest or dividends on holdings of bonds or stocks. This brings us to the second important economic concept: Wealth consists of the net dollar value of assets owned at a given point in time. Note that wealth is a stod (like the volume of a lake) while income is a flow per unit of time (like the flow oCa stream). A household’s  wealth includes its tangible items (houses, cars and other consumer durable goods, and land) and its Financial holdings (such as cash, savings accounts,’ bonds, and stocks). All items that are of value are called assets, while those that are owed are called Ii; abilities. The difference between total assets and total liabilities is called wealth or net worth.

Table 12-2 presents a breakdown of the asset holdings of Americans from 1989 to 1998. The single most important asset of the majority of households is the family home: 66 percent of families own houses, as compared with 55 percent a generation ago. Most households own a modest amount of financial wealth. in savings accounts and corporate stocks. But it turns out that a large proportion of the nation’s financial wealth is concentrated in the hands of a small fraction of the population. About one-third of all wealth is owned by the richest 1 per~ cent of American households. 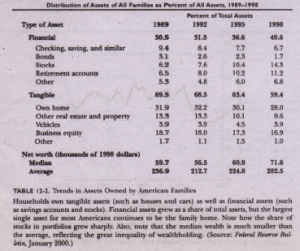