The American economy entered the 1960 s having experienced numerous recessions. John Kennedy took over the presidency hoping to resuscitate the economy. This was the era when the “New Economics,” as the Keynesian approach was called, came to Economic advisers to Presidents Kennedy and Johnson recommended expansionary policies. and Congress enacted measures to stimulate the economy. including sharp cuts in personal and corporate taxes in 1963 and 1964: GOP grew 4 percent annually during the early 1960s, unemployment declined and prices were stable. By 1965, the economy was at its potential output.

Figure ~7 illustrates the events of this period. The tax cuts and defense expenditures increased aggregate demand, shifting the aggregate’ demand curve to the right  AD to’ AD’ , with the equilibrium shifting from’E to E’. Output and employment rose sharply, and preach began to accelerate as output exceeded capacity limits. Economists learned that it was easier to the economy than to persuade pollination 10 raise taxes to slow the economy when inflation threatened. This lesson led many to question the wisdom of using’fiscal policies to stabilize the economy. 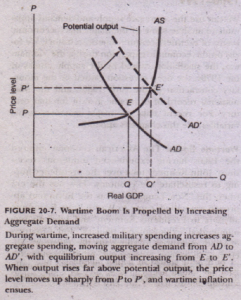