While analysis of the general wage level is important for comparing different countries and times, we often want to understand wage differentials. In practice, wage rates differ enormously. The average wage is as • hard to define as the average person. An auto executive- may earn $4 million a year at the same time that a clerk earns $15,000 and a farmhand $12,000. A doctor may earn 15 or 20 times more than-a lifeguard even though both are saving lives. In the same factory, a skilled machinist may earn $500..a week, while an unskilled janitor gets $200.

Women may be_ paid $300 a week at the same time that equally qualified men earn $400. In addition, there is a wide range of wage rates among broad industry groups. Table 13-3 on ,page. 250 shows that smaller, non unionized sectors such as farming or retail trade tend to pay low wages.while the larger firms in manufacturing pay twice as much.

But within major sectors there are large variations that depend on worker skills and market conditions- fast-food workers make much less than doctors even though they all provide services How can we explain these wage differentials? Let’s consider first a perfect competitive labor market, one in which there are large numbers of workers and employers, none of which has the power to affect .wage rates appreciably.f If all jobs and all people are identical in a perfectly competitive labor market, competition. will cause the hourly wage rates to be exactly equal. No employer would pay more for the work of one person than for that person’s identical twin or for another person who possessed identical skills. This means that to explain the pervasive wage differences across industries or individuals, we must look to either differences in jobs, differences in people, or imperfect competition in labor markets. 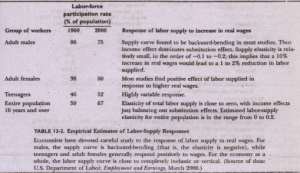