Marshall states the law thus: The additional benefit which a person  rives (rum a fen increase of his stock of a thing diminishes with every creative in stock that  already has.We might add that with every diminution of his stock. the marginal utility will go on increasing. In other words, the marginal utility varies inversely with the stock, although not necessarily in the same proportion.

As explained below, two important reasons can be given, for diminishing marginal utility: (a) Each particular want is satiable. and (b) goods are imperfect substitutes for one another and they tend to be consumed in appropriate proportions.

The following diagram illustrates the Law of Diminishing Marginal Utility as applied to the consumption of toasts, See the table given. 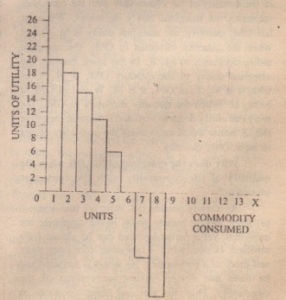 (b) Another reason of thc diminishing marginal utility is that goods are imperfect substitutes for one another. Different commodities satisfy different wants. When a consumer goes on consuming a commodity, the marginal utility falls as his want is satisfied. But if the commodity could be substituted for other commodities, it would. have satisfied other wants.Its marginal utility would not have decreased even though its quantity increases.