Discrimination is a complex social and economic process. It is rooted in social customs and was enforced by laws that denied disadvantaged groups a decent education and good jobs. Even after equality under law was established, separation of races. and sexes perpetuated social and economic stratification. As Figure 13-9 shows, the progress in narrowing the earnings gaps between different groups slowed over the last two decades and even reversed for Hispanic workers.

Substantial differences. in incomes, wealth, and jobs persist. The deteriorating social order in central cities, the disintegration of the traditional nuclear family, cuts in government social programs, harsh drug laws, a backlash against man anti discrimination programs, and the declining relative wages of the unskilled have led to declining living standards for many minority groups. 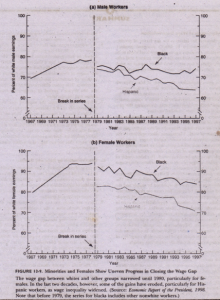