While American unemployment rates fell to unusually low levels in the late I99Os. European unemployment rose sharPly over the last three decades. Figure 31-10 on page 679 shows the unemployment history in the two regions How can we explain the divergent labor markets of these two regions! Part of the reason probably lies in differences in macroeconomic polkies.The United States has a single central bank.’the Federal Reserve. that keeps careful watch over the American economy. When unemployment begins to rise, as it did in 1982 and again in 1991.the Fed loosened monetary policy to stimulate aggregate demand. increase output, and stem the unemployment increase, Central banking in Europe was historically fragmented. Until 1999.Europe was a confederation of countries whose monetary policies we.re dominated by the German central bank. the Bundesbank. The Bundesbank was fiercely independent and aimed primarily at maintaining price stability in Germany.

When unemployment rose in the rest of Europe and inflation rose in Germany-as happened after the reunification of Germany in 1990-the Bundesbank increased interest rates. This tended to depress output and raise unemployment in countries whose monetary policies were tied to Germany·s. You can see this feature in the rise in unemployment in Europe after 1990.

A second feature of European unemployment relates “to rising structural unemployment. Europe was the birthplace of the welfare’ state. and countries like Germany. France and Sweden legislated we benefits, unemployment insurance. minimum wages. and job protection for workers. These policies tend to increase ral wages because workers possess greater barpinin& power and have more attracti1le alternative uses for their time. Persons who are collecting welfare or unemployment benefits might be voluntarily generally’ counted as unemployed in the actual statistics. The United States has been less generous in its unemployment and welfare benefits. and recent changes in welfare laws will make welfare even less attractive relative to work in , the coming years.

We can understand the divergent economies in terms of our labor market supply-and-demand diagrams in Figure 31-6, American labor market institutions resemble the flexible-wage economy shown in part (0). A decline in the dtmand for labor win lead to an equilibrium at E.By contrast, the more rigid labor market institutions in Europe resemble Figure 31-6(b). In Europe. real wages have not declined as much as in the United States. but the number of the employed has grown slowly while pimento has grown sharply.

What is the remedy for the high level of unemployment in Europe Some economists believe that the new European central bank may maintain, a better balance of aggregate supply and demand in that region. (Recall our discussion of the European Monetary Union in Chapter 30.) Demand-management policies wide do little to cure Europe’s structural unemployment, however. Many experts believe that it will be necessary to improve European labor market institutions by reducing the generosity of welfare and unemployment insurance and removing restrictions on hiring and firing practices of firms.

Slowly and painfully.reforms have been introduced in many countries. These reforms. along with monetary easing., a depreciating Euro. and the pull of the American economic locomotive. begun to reduce the high unemployment in the European economy. 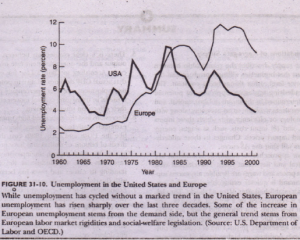