The Theory. According to Prof. knight, it is uncertainty bearing rather than risk-taking which is the special function of the entrepreneur and leads to profit. We’ have seen that there are certain risks which are foreseen and provided against. Risks of death and of accident like fire and ship sinkings are statistically determinable. Their incidence is measurable. 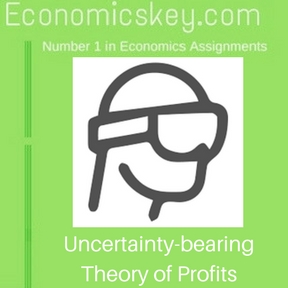 (ii) Uncertainty-bearing is not the only function of the entrepreneur. The profit that he gets is also the reward for other services that he renders, e.g., initiating, coordinating, etc. (iii) Uncertainty Bearing cannot be elevated to the status of a factor of production. It is an element of real costs which means exertion, abstinence, sacrifice, etc., as distinguished from money cost. Cost is not generally measured in terms of real cost. We know that capital is a factor of production but not abstinence that is needed to have capital. Prof. Knight. (iv) Knight’s theory does not seem to have much relevance to thc real world Businessmen continue to estimate profits ex-ante in defiance of this theory. This theory has been criticised as heavily insulated from empirical testing and empirical relevance