Total Cost and the Shutdown Condition

For example, suppose the firm were faced with a market price of $35, shown by the horizontal fl’fl’line in Figure 8-2. At that price, Me equals price at point (~ a point at which the price is actually less than the average cost of production. the firm want to keep producing even though it was incurring a loss?

Surprisingly the correct answer is yes. The firm should minim I which is the same thing as maximizing profits. Producing at point Would roe suit in a loss of only $20,000, whereas shutting down would involve losing $55,000 (which is the fixed cost). The firm should therefore continue to produce.

To understand this point, remember that a firm must still cover its contractual commitments even. when it produces nothing. In the short run, the firm must pay fixed costs such as interest to the bank, rentals on the oil rigs, and directors’ salaries, The balance of the firm’s costs are variable costs, such as those for materials,· production workers, and fuel, which would have zero cost at zero production, It will be advantageous to continue operations, with P at least as high as Me, as long as revenue covers variable costs.

The critically low market price at which revenues just equal variable costs (or, equivalently, at which losses exactly equal fixed costs) is called the shut· down point. For prices above the shutdown point, the firm will produce along its marginal cost curve because, even though the firm might be losing money It would lose more. money by shutting down. For prices below the shutdown point, the firm will produce nothing at all because by shutting don the fin will lose only its fixed costs. This gives the shutdown rule.

Shutdown rule: The shutdown point comes where revenues just cover variable costs or where losses are equal to fixed costs. When the price falls below average variable costs. the firm will maximize profits (minimize ‘its losses) bv shutting down. 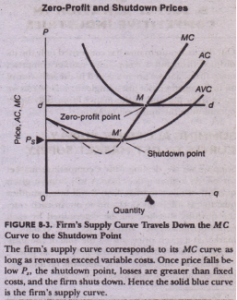 The analysis of shutdown conditions leads to the surprising conclusion that profit-maximizing firms may in the short run continue to operate even though they are losing money. This condition will hold particularly for firms that are heavily indebted and therefore have high fix~ costs (the airlines being a good example). For these firms, as long as losses are less than fixed costs, profits are maximized and losses are minimized when they pay the fixed costs and still continue to operate.

Unemployed rigs In the industrialist- A striking example of the shutdown rule at work was seen in the oil industry. In 1985. when the price of crude oil was $27 a barrel. there were about 35,000 oil wells United States. But by the next year, the number of wells being drilled had fallen by 50 percent to under 19,000. Had the oil fields run dryl Not at all. Rather. duction was discouraged because the price of oil fell by  most half.to only $14 a barrel. It ~ the profits, not the wells. that dried up. As a result, companies just shut down many . This workaholics In remorse, as  the Persian Gulf war in 1990. die price of oil  beanie more.