By 1979 the economy had recovered from the 1973 supply shock. Output had returned to its potential. But unrest in the Middle East led to another oil shock as the Iranian revolution produced a jump in oil prices from $14 per barrel in early 1978 to $34 per barrel in 1979. Inflation increased dramatically-averaging 12 percent per year from 1978 to 1980.

The tough monetary. policies of the 1980s set the stage for the .long economic expansion from 1982 through 2000. This period marked by a single mild recession in 1990-1991, proved to be the period of the greatest macroeconomic stability in American history. Real GDP grew at an average rate of 3 percent annually, with price inflation averaging slightly above percent. By the late 19905, many of those in the workforce had never experienced a severe business cycle or inflationary episode, and some were proclaiming naively that
the business cycle was abolished in this “new era” economy. 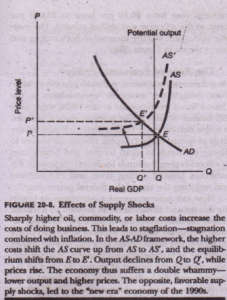