THE TRADE-OFF BETWEEN RISK AND RETURN Economics Assignment Help

The Basic Tools Of Finance

THE TRADE-OFF BETWEEN RISK AND RETURN

One of the Ten Principles of Economics in Chapter 1 is that people face trade-offs, The trade-off that is most relevant for understanding financial decisions is the trade-off between risk and return As we have seen, there are risks inherent in holding stocks, even in a diversified portfolio. But risk averse people are willing to accept this uncertainty because they are compensated for doing so. l list oratorically, stocks have offered much higher rates of return than alternative financial assets, such as bonds and bank savings accounts. Over the past two centuries, stocks offered an average real return of about 8 percent per year, while short-term government bonds paid a real return of only 3 percent per year. When deciding how to allocate their savings, people have to decide how much risk they are willing to undertake to earn the higher return. Figure 3 illustrates the risk-return trade-off for a person choosing how
to allocate his portfolio between two asset classes.

• The first asset class is a diversified group of risky stocks, with an average return of 8 percent and a standard deviation of 20 percent (You may recall from a math or statistics class that a normal random variable stays within two standard deviations of its average about 95 percent of the time. Thus, while actual returns are centered around 8 percent, they typically vary from a gain of 48 percent to a loss of 32 percent.)

• The second asset class is a safe alternative, with a return of 3 percent and a standard deviation of zero The safe alternative can be either a bank savings account or a government bond.

Each point in this figure represents a particular allocation of a portfolio between risky stocks and the safe asset. The figure shows that the more a person puts into stocks, the greater is both the risk and the return Acknowledging the risk-return trade-off does not, by itself, tell us what a person should do. The choice of a particular combination of risk and return depends on a person’s risk aversion, which reflects a person’s awn preferences. But it is important for stockholders to realize that the higher average return that they enjoy comes at the price of higher risk.

Figure 3  The Trade-off between Risk and Return

When people increase the percentage of their savings that they have invested in stocks, they increase the average return they can expect to earn, but they also increase the risks they face. 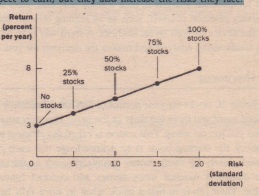 The Trade-off between Risk and Return

More from Category: The Basic Tools Of Finance