To reduce the inflation rate, the Fed has to pursue contraction monetary policy. Figure 10 shows some of the effects of such a decision. When the Fed slows the rate at which the money supply is growing, it contracts aggregate demand The fall in aggregate demand, in turn, reduces the quantity of goods and services that firms produce, and this fall in production leads to a rise in unemployment. The economy begins at point A in the figure and moves along the short-run Phillips curve to point B, which has lower inflation and higher unemployment Over time, as people come to understand that prices are rising more slowly, expected inflation falls, and the short-run Phillips curve shifts downward. The economy moves from point 13 to point C. Inflation is lower than it was initially at point A, and unemployment is.back at its natural rate. 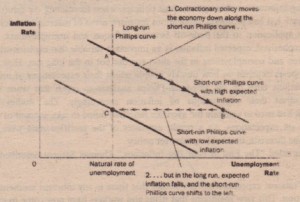 Thus, if a nation wants to reduce inflation, it must endure a period of high unemployment and 10 output. In Figure 10, this cost is represented by the movement of the economy through point B as it travels from point A to point C. The size of this cost depends on the slope of the Phillips curve and how quickly expectations of inflation adjust to the new monetary policy.

According to studies of the Phillips curve and the COSI of disinflation, this sacrifice could be paid in various ways. An immediate reduction in inflation would depress output by 30 percent for a single year, out that outcome was surely too harsh even for an inflation hawk like Paul Volcker. It would be better, many argued, to spread out the cost over several years. If the reduction in inflation took place over 5 years, for instance, then output would have to average only 6 percent below trend during that period to add up to
a sacrifice of 30 percent. An even more gradual approach would be to reduce inflation slowly over a decade so that output would have to be only 3 percent below trend. Whatever path was chosen, however, it seemed that reducing .inflation would not be easy.