THE RELATIONSHIP BETWEEN SHORT-RUN AND LONG-RUN AVERAGE TOTAL COST

For many firms, the division of total costs between fixed and variable costs depends on the time horizon. Consider, for instance, a car manufacturer, such as Ford Motor Company. Over a period of only a few months, Ford cannot adjust the number or sizes of its car factories. The’ only way it can produce additional cars is to hire more workers at the factories it already has. The cost of these factories is, therefore, a fixed cost in the short run. By contrast, over a period of several years, Ford can expand the size of its factorizes, build new factories, or close old ones. Thus, the cost of its factories is a variable cost in the long run.

Figure 6 Average Total Cost in the Short and Long Runs 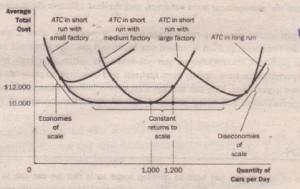 How long does it take for a firm to get to the long run? T-he answer depends on the firm. It can take a year or longer for a major manufacturing firm, such as a car company, to build a larger factory. By contrast, a person running a lemonade stand can go and buy a larger pitcher within an hour or less. There is, therefore, no single answer to how long it takes a firm to adjust its production facilities