The Markets for the Factors of Production

THE PRODUCTION FUNCTION AND THE MARGINAL PRODUCT OF lABOR

To make its hiring decision, the firm must consider how the size of its work force affects the amount of output produced. In other words, it must consider how the number of apple pickers affects the quantity of apples it can harvest and sell. Table I gives a numerical example. In the first column is the number of workers. In the second column is the quantity of apples the workers harvest each week.

These two columns of numbers describe the firm’s ability to produce. Recall that economists use the term production function to describe the relationship between the quantity of the inputs used in production and the quantity of output from production. Here the input is the apple pickers and the “output” is the apples. The other inputs-the trees themselves, the land, the trucks and tractors, and so on-are held fixed for now. This firm’s production function shows that if the firm hires 1 worker, that worker will pick 100 bushels of apples per week. If the firm hires 2 workers, the 2 workers together will pick 180 bushels per week and so on. 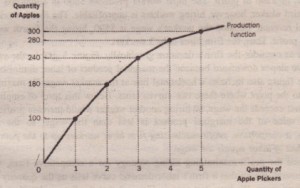 One of the Ten Principles of Economics introduced in Chapter 1 is that rational people think at the margin. This idea is the key to understanding how firms decide what quantity of labor to hire. To take, a step toward this decision, the third column in Table 1 gives the marginal product of labor, the increase in the amount of output from an additional unit of labor. When the firm increases the number of workers from 1 to 2, for
example, the amount of apples produced rises from 100 to 180 bushels. Therefore, the marginal product of the second worker is 80 bushels.

More from Category: The Markets for the Factors of Production