Home » Oligopoly » THE PRISONERS’ DILEMMA AND THE WELFARE OF SOCIETY

THE PRISONERS’ DILEMMA AND THE WELFARE OF SOCIETY Economics Assignment Help

THE PRISONERS’ DILEMMA AND THE WELFARE OF SOCIETY

In some cases, the non cooperative equilibrium is bad for society as well as the players. In the arms-race game in Figure 4, both the United States and the Soviet Union end up at risk. In the common-resources game in Figure 5, the extra wells dug by Chevron and Exxon are pure waste. In both cases, society would be better off if the two players could reach the cooperative outcome. 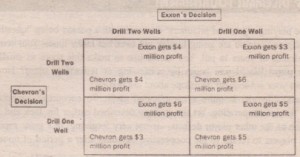 Similarly, consider the case of the police questioning two suspects. Lack of cooperation between the suspects is desirable, for it allows the police to convict more criminals. The prisoners’ dilemma is a dilemma for the prisoners, but it can be a boon to everyone else.