The Influence of Monetary and Fiscal Policy on Aggregate Demand

When the government buys $20 billion of goods from  that purchase has repercussions. The immediate impact of the higher demand from the government is to raise employment and profits at Boeing. Then, as the workers see higher earnings and the firm owners see higher profits, they respond to this increase in income by raising their own spending on consumer goods. As a result, the government purchase from Boeing raises the demand for the products of many other firms in the economy. Because each dollar spent by the government can raise the aggregate demand for goods and services by more than a dollar, government purchases are said to have a multiplier effect on aggregate demand. This multiplier effect continues even after this first round. When consumer spending rises, the firms that produce these consumer goods hire more people and experience higher profits. Higher earnings and profits stimulate consumer spending once again and so on. Thus, there is positive feedback as higher demand leads to higher income, which in turn leads to even higher demand. Once all these effects are added together, the total impact on the quantity of goods and services demanded can be much larger than the initial impulse from higher government spending. • Figure 4 illustrates the multiplier effect. The increase in government purchases of $20 billion initially shifts the aggregate-demand curve to the right from ADI to AD2 by exactly $20 billion. But when consumers respond by increasing their spending, the aggregate-demand curve shifts still further to AD3• This multiplier effect arising from the response of consumer spending can be strengthened by the response of investment to higher levels of demand. For instance, Boeing might respond to the higher

An increase in government purchases of $20 billion can shift the aggregate-demand curve to the right by more than $20 billion. This multiplier effect arises because increases in aggregate income stimulate additional spending by consumers 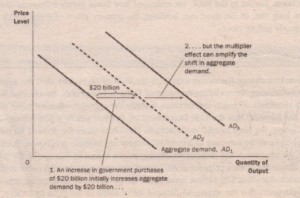 demand for planes by deciding to buy more equipment or build another plant. In this case, higher government demand spurs higher demand for Investment goods This positive feedback from demand to investment is sometimes called the investment accelerator.

More from Category: The Influence of Monetary and Fiscal Policy on Aggregate Demand