Home » Frontiers of Microeconomics » THE MEDIAN VOTER IS KING

THE MEDIAN VOTER IS KING

Despite Arrow’s theorem, voting is how most societies choose their leaders and public policies, often by majority rule. The next step in studying government is to examine how governments run by majority rule work. That is, in a democratic society, who determines what policy is chosen? In some cases, the theory of democratic government yields a surprisingly simple answer. Let’s consider an example. Imagine that society is deciding how much money to spend on some public good, such as the army or the national parks. Each voter has his own most preferred budget, and he always prefers outcomes closer to his most preferred value to outcomes further away. Thus, we can line up voters from those who prefer the smallest budget to those who prefer the largest. Figure 1 is an example. Here there are 100 voters, and the budget size varies from zero to $20 billion. Given these preferences, what outcome would you expect democracy to produce? According to a famous result called the median voter theorem, majority rule will produce the outcome most preferred by the median voter. The median voter is the voter exactly in the middle of the distribution. In this example, if you take the line of voters ordered by their preferred budgets and count 50 voters from either end of the line, you will find that the mediarl voter wants a budget of $10 billion. By contrast, the

Figure 1 The Median Voter Theorem: An Example
This bar chart shows how 100 voters’ most preferred budget is distributed over five options, ranging from zero to $20 billion. If society makes its choice by majority rule, the median voter (who here prefers $10 billion) determines the outcome. 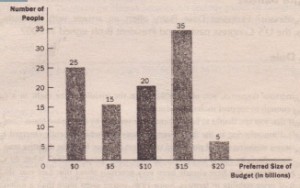 average preferred outcome (calculated by adding the preferred outcomes and dividing by the number of voters) is $9 billion, and the modal outcome (the one preferred by the greatest number of voters) is $LS billion The median voter rules the day because his preferred outcome beats any other proposal in a two-way race. In our example, more than half the voters want $10 billion or more, and more than half want $10 billion or less. If someone proposes, say, $8 billion instead of $10 billion, everyone who prefers $10 billion or more will vote with the median voter. Similarly, if someone proposes $12 billion instead of $10 billion, everyone who wants $10 billion or less will vote with the median voter. In either case, the median voter has more than half the voters on his side. What about the Condorcet voting paradox? It turns out that when the voters are picking a point along a line and each voter aims for his own most preferred point, the Condorcet paradox cannot arise. The median voter’s most preferred outcome beats all comers. One implication of the median voter theorem is that if two political parties are each trying to maximize their chance of election, they will both move their positions toward the median voter. Suppose, for example, that the Democratic party advocates a budget of $15 billion, while the Republican party advocates a budget of $10 billion. The Democratic position is more popular in the sense that $15 billion has more proponents than any other single choice. Nonetheless, the Republicans get more than 50 percent of the vote They will attract the 20 voters who want $10 billion, the 15 voters who want $5 billion, and the 25 voters who want zero. If the Democrats want to win, they will move their plat form toward the median voter. Thus, this theory can explain why the parties in a two-party system are similar to each other They are both moving toward the median voter Another implication of the median voter theorem is that minority views are not given much weight. Imagine that 40 percent of the population want a lot of money spent on the national parks, and 60 percent want nothing spent. In this case, the median voter’s preference is zero, regardless of the intensity of the minority’s view. Such is the logic of democracy. Rather than reaching a compromise that takes into account everyone’s preferences, majority rule looks only to the person in the exact middle of the distribution.

More from Category: Frontiers of Microeconomics