A~ Prof. Kaldor observes, the Marxian theory is an adapt.ruon uf Ricardo’s surplus theory. According tv Marx, tltl’ value of a commodity is determined by thl’ labour-time necessary for its production. But labour produces more than the value of its labour power i.e. more than what is necessary for maintaining the minimum subsistence standard. Silence a surplus emerges 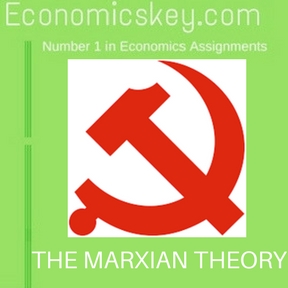 Marx took the surplus value (Profit) as the indicator of the capitalists progress and decline -;One uf the main factor responsible for the collapse of capitalism is due to the falling rate of profit and this happens as the capitalists increases the fixed capital to replace the labour force. The falling rate uf profit as one uf the indicator of the collapse of capitalism. The notion of surplus value i, crucial till the t i~ the aniou lit of thi the relative share or Ielts in the national income. \Vngc~ remaining constant at the -ubisync level, the difference between total output and the subsistence output (i.c. the rate of exploitation) increases with technical progress. l lcru c under the capitalistic system the relative share of wage, in the national income declines and the shale of profits increases (quite the opposite of what Ricardo thought), though the rate of plOlit v. ill go down as a result of capital accumula.

But Marx has proved to be a bad prophet of future events. Worker’s living conditions have continued to improve and the rate of profit has not fallen. Labour theory of value on which he basic his thew  been rejected.