Consider a simplified economy where firms can invest indifferent projects: A, B, C, and so forth, up to H These investments are so durable (like power plants or buildings) that we can ignore the need for replacement. Further, they yield a constant stream of net income each year, and there is no inflation. Table 22-5 shows the financial data on each of the investment projects.

Finally, the last two columns show the annual net profile from each investment. For lucrative project A. the net annual profit is $1400 a year Per $1000 invested at a 10 percent interest ‘rate. Project H loses money. 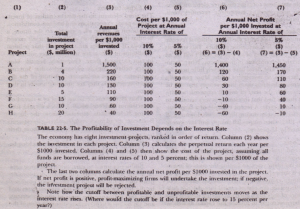 More from Category: Consumption and Investment