Home » Saving Investment and the Financial System » THE HISTORY OF U.S. GOVERNMENT DEBT

THE HISTORY OF U.S. GOVERNMENT DEBT

The debt of the U.S. federal government, expressed here as a percentage of GDP, has varied substantially throughout history. It reached its highest level after the large expenditures of World Warn but then declined through out the 19505 and 19605. It began rising again in the early 19805 when Ronald Reagan’s tax cuts were not accompanied by similar cuts in government spending. It then stabilized and even declined slightly in the late 19905 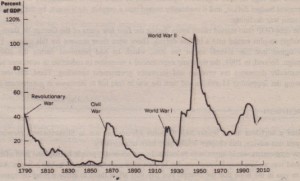 The behavior of the debt-GDP ratio is one gauge of what’s happening with the government’s finances. Because GDP is a rough measure of the government’s tax base, a declining debt-GDP ratio indicates that the government indebtedness is shrinking relative to its ability to raise tax revenue. This suggests that the government is, in some sense, living within its means. By contrast, a rising debt-GDP ratio means that the government indebtedness is increasing relative to its ability to raise tax revenue. It is often interpreted as meaning that fiscal policy=-government spending and taxes-cannot be sustained forever at current levels Throughout history, the primary cause of fluctuations in government debt is war. When wars occur government spending on national defense rises substantially to pay for soldiers and military equipment Taxes typically rise as well but by much less than the increase in spending. The· result is a budget deficit and increasing government debt. When the war is over, government spending declines, and the debt-GDP ratio starts declining as well There are two reasons to believe that debt financing of war is an appropriate policy. First, it allows the government to keep tax rates smooth over time. Without debt financing, tax rates would have to rise sharply during wars, and this would cause a substantial decline in economic efficiency. Second, debt financing of wars shifts part of the cost of wars to future generations, who will have to payoff the government debt. This is arguably a fair distribution of the burden, for future generations get some of the  benefit when one generation fights a war to defend the nation against foreign aggressors  One large increase in government debt that cannot be explained by war is the increase that occurred beginning around 1980. When President Ronald Reagan took office in 1981, he was committed to smaller government and lower taxes. Yet he found cutting government spending to be more difficult politically than cutting taxes. The result was the beginning of a period of large budget deficits that continued not only through Reagan’s time in office but also for many years thereafter. As a result, government debt rose from 26 percent of GDP in 1980 to 50 percent, of GDP in 1993 As we discussed earlier, government budget deficits reduce national saving, investment, and long-run economic growth, and this is precisely why the rise in government debt during the 1980s troubled many economists and policymakers. When Bill Clinton moved into the Oval Office in 1993, deficit reduction was his first major goal. Similarly, when the Republicans took control of Congress in 1995, deficit reduction was high on their legislative agenda. Both of these efforts substantially reduced the size of the government budget deficit, and it eventually turned into a surplus. As a result, by the late 1990s, the debt GDP ratio was declining The debt-GDP ratio started rising again during the first few years of the George W Bush presidency, as the budget surplus .turned into a budget deficit. There were three reasons for this change. First, President Bush signed into law several major tax cuts, which he- had promised during the 2000 presidential campaign. Second, in 2001, the economy experienced a recession (a reduction in economic activity), which automatically decreases tax revenue and increases government spending. Third, the war on terrorism
following the September 11 attacks and then the war in Iraq led to increases in government spending.