The final act in our macroeconomic drama concerns the growth of output and prices over the entire period since 1900. Output has grown by a factor of almost 20 since the turn of the century. How can we explain this phenomenal increase?

A careful look at American economic growth reveals -that the growth rate during this century has averaged 31/2 percent per year. Part of this growth was due to growth in the scale of production as inputs of capital, labor, and even land grew sharply over this period. Just as important were improvements in efficiency due to new products (such as automobiles) and new processes (such as electronic computing). Other, less visible factors also contributed to economic growth, such as improved management techniques and improved services (including such innovations as the assembly line and overnight delivery). Many economists believe that the measured growth understates true growth because our official statistics tend to miss the contribution to living standards from new products and improvements in product quality. For example, with “the introduction of the indoor toilet, millions of people no longer. had to struggle through the winter snows to relieve themselves in outhouses, yet this increased comfort never showed up in gross domestic product.

The increase in inputs and improvements in efficiency led to a massive rightward shift of the AS curve from AS 11lOO to AS l999• There was also a sharp increase in the cost of production. as average hourly-earnings rose rom $0.10 per hour to SUMO per hour. so the AS curve also shifted upward. The overall effect, then. was the increase in both output and prices shown in Figure 20-9. 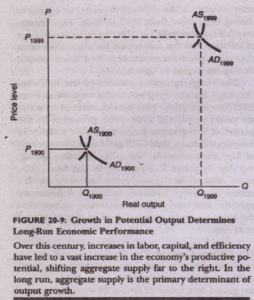