Figure 12 The Greenspan Era
This figure shows annual data from 1984 to 2004 on the unemployment rate and on the inflation rate (as measured by the GDP defoliator). During most of this period, Alan Greenspan has been chairman of the Federal Reserve. Fluctuations in, flotation and unemployment have been relatively small. 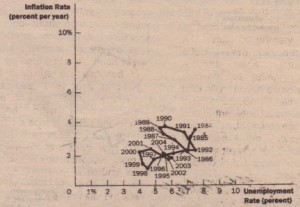