Speculative bubbles always produce crashes and sometimes lead to. economic, panics. One traumatic event has cast a shadow over stock markets for decades-a-the 1929 panic and crash. This’ event Ushered’ in the long and painful Great Depression of the 19305.

When the bottom fell out of the market in 1929, investors, big and small, who had bought on margin
could not put up funds to cover their holdings, and the market tell still further. The bull market (rising)
turned into a bear (or declining) market. By the trough of the Depression in 1933, the market had . declined.85 percent.

Figure 25-7 on page 533 shows the history since . 1920 of the Standard and Poor’s 500. The lower curve shows the nominal stock-price average, which records the actual average during a particular year. The upper line shows the real price ‘of stocks; this equals the nominal price divided by an index of consumer prices that equaled. 1 in 2000. 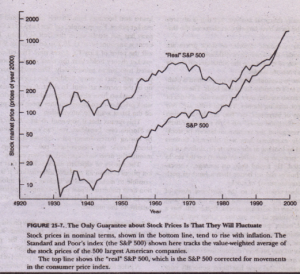 The 19905 were yet another period of buoyant economic performance and booming stock prices. The major stock-price indexes rose by more than 300 percent over this period. Internet stocks became the darling of investors and sold at price-earnings ratios of more than 100 while traditional stocks sold for price-earnings ‘ratios of 20 or 30. Federal Reserve chairman Alan Greenspan cautioned against “irrational exuberance”; graybeards noted the parallel between the infatuation with the Internet and earlier disastrous investments in tulips or Florida real estate; Yale economist Robert published a best-seller warning of an overvalued market pushed ever higher by unrealistic herd-like behavior. But investors ignored these financial  arid plunged ahead. ‘ Where will it all end? Is there a crystal ball that will foretell the movement of stock prices? This is the subject of finance theory.