In analyzing labor earnings, economists tend to look at the real “-age, which represents the purchasing power of an hour’s work, or the money wages divided by the cost of living.’ By that measure, American workers today are far better off than they were 100 years ago. Figure 13-1 on page 244 shows the real average hourly wage. or the dollar wage adjusted for inflation. along with the  hours of work.

The same powerful gains for workers are found in every industrial country .. Across Western Europe.japan, and the rapidly industrializing countries of East Asia, there has definitely been a steady, long-term improvement in the average worker’s ability to buy food. clothing, and housing. as well as in the health and longevity of the population. In Europe and the United States, these gains began in earnest in the early IHOOs. with the advent of the technological and social changes associated with , the Industrial Revolution. Before that time real Meandered up and down, with few long-term gains.

That is not to say that the Industrial Revolution was an unmitigated benefit to workers. especially in the laissez-faire days of the 1800s. In point of fact. a Dickens novel could hardly do justice to the dismal conditions of child labor, workplace dangers. and poor sanitation in early-nineteenth-century factories. A workweek of 84 hours was the prevailing rule, with time out for breakfast and sometimes supper. A good deal of work could be squeezed out of a 6-year-old child, and if a woman lost two fingers in a loom, she still had eight left, Was it a mistake for people to leave the farms for the rigors of the factory? Probably not. ‘Modern emphasize that even with the demanding conditions in the factories. living standards were nevertheless greatly improved over those in the’ earlier centuries of agrarian feudalism.

The Industrial Revolution was giant step forward for the working class not a step back. The idyllic picture of the healthful, jolly countryside peopled by stout yeomen and happy peasantry is a historical myth unsupported by statistical research. 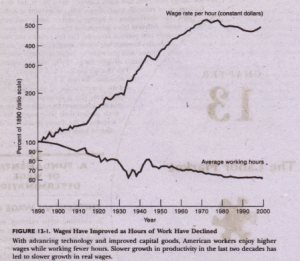