A Macroeconomic Theory OF The Open Economy

The Effects of Capital Flight

If people decide that Mexico is a risky place to keep their savings, they will move their capital to safer havens such as the United States, resulting in an increase in Mexican net capital outflow. Consequently, the demand for loan able funds in Mexico rises from D) to Dz’ as shown in panel (a), and this drives up the Mexican real interest rate from ‘1 to ‘z. Because net capital outflow is higher for any interest rate, that curve also shifts to the right from NCO) to NCOz in panel (b). At the same time, in the market for foreign-currency exchange, the supply of pesos rises from 5) to 52′ as shown in panel (c). This increase in the supply of pesos causes the peso to depreciate from £1 to £2’ so the peso becomes less valuable compared to other currencies. 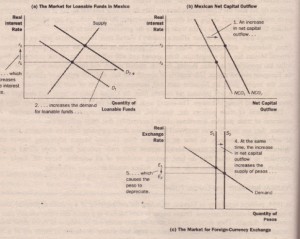 The Effects of Capital Flight

net capital outflow is higher [.,r any Interest rate, the net-capital-outflow curve also shifts to the right from NCOI to NC02, as In panel (b To see the effects of capital  011 the Mexican economy, we compare the old and new equilibria. Panel (a) of Figure 7 shows that their. Tc.ISL”demand for loan able funds causes the interest rate in Mexico to rise from r, to Mexican net capital outflow increases. (Although the rise in the interest rate does make Mexican assets more attractive, this only partly offsets the impact of capital flight on net capital outflow.) Panel (c) shows that the increase in net  capital outflow raises the supply of pesos in the market for foreign-currency exchange from S, to S2′ That is, as people try to get out of Mexican assets, there is a large supply of pesos to be converted into dollars. This increase in supply causes the peso to depreciate from E, to E2. Thus, capital flight from Mexico increases Mexican interest rates and decreases the value of the Mexican peso in the market for foreign-currency exchange. This is exactly what was observed in 1994. From November 1994 to March 1995, the interest rate on short-term Mexican government bonds rose from 14 percent to 70 percent, and the peso depreciated in value from 29 to 15 U.S. cents per peso.

More from Category: A Macroeconomic Theory OF The Open Economy