THE EFFECTS OF A SHIFT IN AGGREGATE DEMAND Economics Assignment Help

THE EFFECTS OF A SHIFT IN AGGREGATE DEMAND

Suppose that a wave of pessimism suddenly overtakes the economy. The cause might be a scandal in the White House, a crash in the stock market, or the outbreak of war overseas. Because of this event, many people lose confidence in the future and alter their plans. Households cut back on their spending and delay major purchases, and firms put off buying new equipment.

What is the macroeconomic impact of such a wave of pessimism? In answering this question, we can follow the three steps we used in Chapter 4 when analyzing supply and demand in specific markets. First, we determine whether the event affects aggregate demand or aggregate supply. Second, we decide which direction the curve shifts. Third, we use the diagram of aggregate demand and aggregate supply to compare the initial and the new equilibrium. The new wrinkle is that we need to add a fourth step: We have to keep track of a new short-run equilibrium, a new long-run equilibrium, and the transition between them. Table 3 summarizes the four steps to analyzing economic fluctuation.

2 Decide in which direction the curve shifts.

3. Use the diagram of aggregate demand and aggregate supply to see how the shift changes output and the price level in the short run,

The first two steps are easy. First, because the wave of pessimism affects spending plans, it affects the aggregate-demand curve. Second, because households and firms now want to buy a smaller quantity of goods and services for any given price level, the event reduces aggregate demand. As Figure 8 shows, the aggregate demand curve shifts to the left from ADI to AD2.

With this figure, we can perform step three: By comparing the initial and new equilibrium, we can see the effects of the fall in aggregate demand. In the short run, the economy moves along the initial short-run aggregate-supply curve, ASI, going from point A to point B. As the economy moves between these two points, output falls from YI to Y2, and the price level falls from PI to P2• The falling level of output indicates that the economy is in a recession. Although not shown in the figure, firms respond to lower sales and production by reducing employment. Thus, the pessimism that caused the shift in aggregate demand is, to some extent, self-fulfilling: Pessimism about the future leads to falling incomes and rising unemployment.

Now comes step four-the transition from the short-run equilibrium to the long-run equilibrium. Because of the reduction in aggregate demand, the price level initially falls from PI to P2• The price level is thus below the level that people had come to expect (PI) before the sudden fall in aggregate demand. Although people are surprised in the short run, they wilt not remain surprised. Over time, expectations catch up with this new reality, and the expected price level falls as well. The fall in the expected price level alters wages, prices, and perceptions, which in turn influences the position of the short-run aggregate supply curve.

Figure 8 A Contraction in Aggregate Demand

A faU in aggregate demand is represented with a le~rd shift in the aggregate-demand curve from ADl to ADz. In the short run, the economy moves from point A to point B. Output falls from Yl to Yz, and the price level falls from Pj to Pz’ Over time, as the expected price level adjusts, the short-run aggregate-supply curve shifts to the right from AS) to ASz, and the economy reaches point C, where the new aggregate-demand curve crosses the long-run aggregate-supply curve. In the long run, the price level falls to p.3′ and output returns to its natural rate. 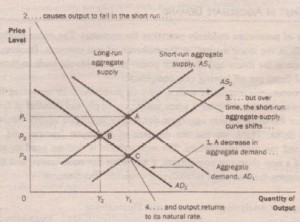 What should policymakers do when faced with a sudden fall in aggregate demand? In this analysis, we assumed they did nothing. Another possibility is that, as soon as the economy heads into recession(moving from point A to point B), policymakers could take action to increase aggregate demand. As we noted earlier, an increase in government spending or an increase in the money supply would increase the quantity of goods and services demanded at any price and, therefore, would shift the aggregate-demand curve to the right. If policymakers act with sufficient speed and precision, they can offset the initial shift in aggregate demand, return the aggregate-demand curve back to AD., and bring the economy back to point A. If the policy is successful, the painful period of depressed output and employment can be reduced in length and severity. The next chapter discusses in more detail the ways in which monetary and fiscal policy influence aggregate demand, as well as some of the practical difficulties in using these policy
instruments .

To sum up, this story about shifts in aggregate demand has three important lessons:

• In the short run, shifts in aggregate demand cause fluctuations in the economy’s output of goods and services.

• In the long run, shifts in aggregate demand affect the overall price level but do not affect output.