in a free-market economy, the government gen~rally lets people decide what to buy with their money. If some want· to buy expensive cars while others want to buy an expensive house, we assume that they know what is best for them and that in the interests of personal freedom the government should respect their preferences.

In some cases, but sparingly and with great hesitation. the government decides 10 overrule private adult decisions. These are cases of merit goods, whose consumption is.thought intrinsically worthwhile, and the opposite, which, are demerit goods. whose ‘consumption is deemed harmful. For these goods, we recognize that some consumption activities have such serious effects that overriding individuals’ private decisions may be desirable. Today, most societies provide for free public education and emergency health care; on the other hand. society also penalizes or forbids consumption of such harmful substances as cigarettes. alcohol. arid heroin. 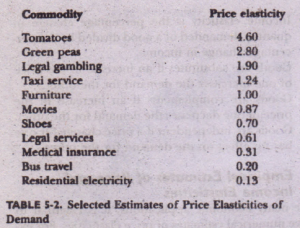 Estimates of price elasticities of demand show a wide range of variation. Elasticities are generally high tor good a for which ready substitutes are available. like tomatoes or peas. Low price elasticities exist for those goods like electricity which are essential to daily life and which brave no close substitutes. [Source: Heinz Kohl-er. Micro economic: theory- and Application (Heath. Lexington. MA. 1992).] 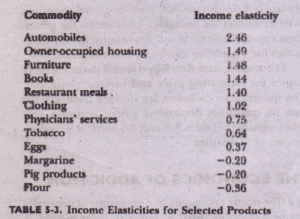 One of the most controversial cases of demerit goods concerns addiction. An addictive substance is one for which the desire to consume depends sign scantly on past consumption. The heavy smoker and the addicted heroin user may bitterly regret the acquired habit; but, such is the nature of addiction. it is difficult to kick the habit after it has become established.A regular user of cigarettes or heroin is much more likely to desire these substances than is a nonuser. Moreover, for highly addictive goods. demand is likely to be quite price-inelastic, By contrast. for conventional goods, demands today are not likely to depend so directly on consumption patterns yesterday.

The markets for addictive substances are big business. Annual cigarette expenditures today are around $50 billion, while those on alcohol are about $30 billion. Numbers for illegal drugs are obviously conjectural, but recent estimates of spending on illegal drugs place the total at around $65 billion annually. Consumption of these substances raises major public policy. issues because addictive substances may harm the users and often impose costs and harms on society. The harms to users include early mortality and a wide range of medical problems in the ca se of cigarettes; 10,000 high way fatalities a year attributed to alcohol; failures in school.job. and family. along with high levels of AIDS, ·from intravenous heroin use. Harms to society include the predatory crime that addicts of high-priced drugs engage in; the costs of providing subsidized medical care to those who consume drugs, cigarettes, or tobacco; the rapid spread of communicable diseases, especially AIDS and pneumonia; and the tendency of existing users to recruit new users.

One policy approach, often followed in the United States, is, to prohibit the sale and use of addictive substances and to enforce prohibition with criminal sanctions. Economically, prohibition can be interpreted as a sharp upward shift in the supply curve.After the upward shift, the price of the addictive substance is much higher. During Prohibition (1920- 1933), alcohol prices were approximately 3 times higher than before. Estimates are that cocaine currently sells for at least 20 limes its free-market price.

What is the effect of supply restrictions on the consumption of addictive substances? And how does the prohibition affect the injuries to self and to soviet To answer these questions, we need to consider the nature of the demand for addictive substances.
The evidence indicates that casual consumers of illegal drugs have cheap substitutes like alcohol and tobacco and thus will have relatively high price elasticity of demand. By contrast, hard-core users are often addicted to particular substances and have price-inelastic demands.

One possible outcome is shown in Figure 54.This illustrates the impact of moving from legalized or decriminalized drugs to drug prohibition by tightening supply from SS to S’S’ for the hard-core users of a highly addictive substance like heroin. In this case, demand is highly price-inelastic. As a result of the shift in supply and rise in price, total spending on drugs increases sharply. For such drugs, the outlays may be so great that the user engages in predatory crime. The results, in the view of two economists who have studied the subject. are that ••the market in illegal drugs promotes crime, destroys inner cities. spreads AIDS, corrupts law enforcement officials and politicians, produces and exacerbates poverty, and erodes the moral fabric of society.•7 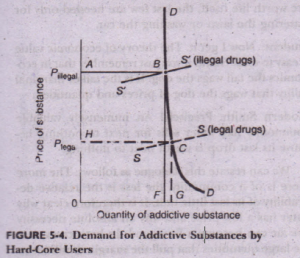 Demand for addictive substances is price-inelastic for hardcore users of drugs like heroin. As a result, if prohibition shifts supply from 50.5 to 0.5’5′, total spending on ‘drugs will rise from OHCG to OABF. For drugs that are highly price-inelastic,this implies that spending on drugs will rise when supply is restrained. What will happen to criminal activity after prohibition if-a substantial fraction of the income of addicts i~obtained by theft? Can you see why some people would argue for reduced drug enforcement or even depletion in this cue? 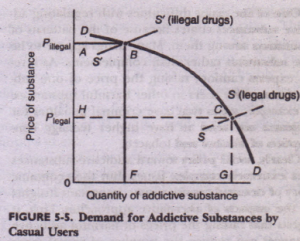 Demand may be-quite elastic for casual-users (those who are not addicted or for whom substituent products are readily available). In this case, restrictions or price increases will have a significant impact on use. Moreover, because demand is price-elastic, total spending on drugs with restrictions falls from OHCG to O.ABF. This depicts the argument ·of those who would severely limit the availability of addictive substances.

Others argue that drug use is highly price-sensitive,especially for casual users, as is shown in Figure 5-5. For example, a teenager might experiment with an addictive substance if it is affordable, while a high price (accompanied by low availability) would be unlikely to tempt- that person down the road to addiction. In this C31e, supply restraints are likely 10 both lower use sharply and reduce spending on addictive substances.

One of the major difficulties with regulating addictive substances comes because of the patterns of substitution among them. Many drugs appear to be close substitutes rather than’ complements. As a result, experts caution, raising the price of one substance may drive users to other harmful substances. For example, states that have criminal penal lit’s for marijuana use tend to have higher teenage consumption of alcohol and tobacco.

Clearly, social policy toward addictive substances raise extremely complex issues. But the economic theory of demand provides some important insights into the impacts of alternative approaches. First, it suggests that raising the prices of harmful addictive substances can reduce the number of casual 11 rs who will be attracted into the market. Second. it cautions us that many of the negative consequence of illegal drugs result from the prohibition of substances rather than from their consumption per Se. Many thoughtful observers conclude with the.paradoxical observation that the overall C’ • of addictive substances-to users, to other people. and to the ravaged inner cities in which the drug trade thrives would be lower if government prohibition were relaxed and the resources currently devoted 0 supply restrictions were instead put into treatment and counseling.