THE DISTRIBUTION OF NATIONAL INCOME

The our new understanding of theory, we can now come back to the question raised at the beginning of the chapter. In a world of intense competition, how do marke~ allocate national income among’the many factors of production?

A amplified theory of was first proposed around the turn of the century by John Bates ~ a distinguished economist at University. It can be applied to competitive markets for any number of final pro Duds and factor inputs. But it is grasped if we consider a simplified world with only one product in which· all accounts are kept in “real- units, that is. in terms of goods. The goods could be com or a basket of different goods and services, but we will call it Q. Moreover, by setting the price eq_ to 1, we can conduct the entire discussion ill real Erma, with the slue of output being And with the wage rate being the real wage in terms of goods or Q. In this situation, a production function tells how milch Q is produced for each quantity of labor-hours, L, and for each quantity of acres of homogeneous land, A. Note that because P = 1. under perfect competition MRP = NIP X P = MP X 1 = MP.

The wage is ‘therefore equal to Alp”,Clark reasoned as follows: A first worker has a large marginal product because there i so much land to work with. Worker 2 has a slightly smaller marginal product. But the two workers are alike. so they must get exactly the same wage. The puzzle is. which wage? The AlP of worker 1. or that of worker 2, or the a\’erage of the two? Under perfect competition, the answer is dear: Landlords will not hire a worker if the market wage • exceeds that worker’s marginal product. So competition will ensure that all the workers receive a wage rate equal to the marginal product of the last worker, But now there is a surplus of total output over the wage bill because earlier workers had higher MPs than the last worker. “11 at happens to produced by all the earlier workers?

The excess with the landlords as their residual earning which we later call rent. “11Y.you might ask, do the landlords, who may be sitting on their vachts thousands of miles away. earn anything on the land- The reason is that each landowner is a participant in the competitive market for land and I:ents the land for its best price. Just as worker competes with worker for johs. landowner competes with landovuer forwnrkerv. We in Clark’s competitive world no unions keeping wages up, no landowners’ conspiracy exploiting workers, and indeed ‘:’0 particular fairness in the wages and rents earned-we just see the operation of supply and demand. have therefore determined the total wages 10 labor,

Figure I~-8 shows that the marginal produce; curve of labor gives the demand curve of all in terms of real wages. Labor-supply factors determine the supply of labor (shown as SS). equilibrium comes at E The total wages paid 10 labor art’ gin’ll  II’ X I, (for example. if 11’= ,j and I. = I million. total 1 million): this the dark rectangle, can also calculate the rent incomer laud. The Luigi blue rent triangle Sf) 111 the surplus output which produced but was not paid out in wages,

The size of the rent triangle is determined by how much the Officiator declines as additional labor is added that is. by the extent of diminishing returns. If there are only a few high-quality acres. additional unit of labor will show sharp diminishing returns and rent’s share will be large. If, by contrast. there is a great deal of homogeneous frontier land just waiting to be cleared, there mar be little tendency to diminishing returns and land’s rent triangle will be very small. We have drawn Figure 12-8 so that labor’s wages are about 3 times larger than property’s rents. This relationship reflects the fact that labor earnings constitute about three-quarters of national income. 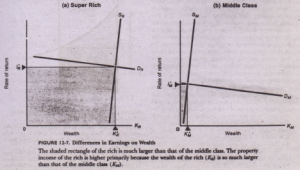