THE CLASSICAL DICHOTOMY AND MONETARY NEUTRAUTY

We have seen how changes in the money supply lead to changes in the average level of prices of goods and services. How do monetary changes affect other economic variables, such as production, employment, real wages, and”real interest rates? This question has long intrigued economists, including David Hume in the 18th century.

1. The velocity of money is relatively stable over time.

2. Because velocity is stable, when the central bank changes the quantity of money (M), it causes proportionate changes in the nominal value of output (P X Y).

3. The economy’s output of goods, and services (Y) is primarily determined by factor supplies (labor, I physical capital, human capital, and natural resources) and the available production technology. In particular, because money is neutral, money does not affect output.

4. With output (Y) determined by factor supplies and technology, when the .central bank alters the money supply (M) and induces proportional changes in the nominal value of output (P  X y), these changes are reflected in changes in the price level (P).

5. Therefore, when t he central bank increases the money supply rapidly, the result is a high rate of inflation. 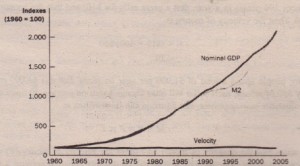