What accounts for this extraordinary divergence in the experience of minority teenagers from that of other groups? One explanation might be that labor market forces (such as the composition’ or location of jobs) ‘have worked against black workers in general. This explanation does not tell the whole . story. While adult black workers have always suffered higher unemployment rates than adult white workers because of lower education attainment. fewer contacts with people who can provide jobs, less on-the-job training, and racial discrimination the ratio of black to white adult unemployment rates
has not increased since World War II. Numerous studies of the sources of the rising black teenage, unemployment rate have turned up no clear explanations for the trend. One possible source is discrimination, but a rise in the black-white unemployment differential would require an increase in racial discrimination-even in the face of increased legal protection for minority workers.

Another theory holds that a high minimum wage along with rising costs of fringe benefits tends to drive low-productivity black teenagers into unemployment. The change in the relation of the minimum wage to average wages allows a test of this hypothesis. From 1981. to 1989, the ratio of the minimum wage to average wages in non farm establishments fell from 46 to 34 percent, yet no improvement in the relative unemployment situation of black teenagers occurred. That no.improvement took place casts doubt on the minimum wage as the prime suspect. Some conservative critics uf the modern welfare state blame high unemployment. of blacks on the culture of dependency that is nurtured by government aid to the poor, although there is lit-. tle firm data to support this proposition. 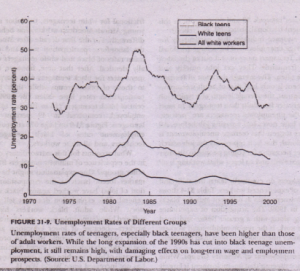 Does high teenage unemployment lead to long lasting labor market damage, with permanently lower level of skills and wage rates? This question is a topic of ongoing research, and the tentative answer is Yes. particularly for minority teenagers. It Spears ‘when youths are unable to develop on the job skills and work attitudes, they earn lower wages and experience higher unemployment when they are older. This finding-suggests that public policy has an important stake in devising programs to reduce teenage unemployment among minority groups.