Economic history records that total output in the United States has grown more than tenfold since the turn of the century. Part of that gain has come from increased inputs, such as labor and machinery. But much of the increase in output has come from technological change, which improves productivity and raises .living standards.

Technological change refers to improvements in the processes for producing goods and services, changes in old products, or introduction of new products. Some examples of technological change are dramatic: wide-bodyjets that increased the number
of passenger-miles per unit of input by almost 50 percent; fiber optics that have lowered cost and improved reliability in telecommunications; and improvements in computer technologies that have increased computational power by more than 1000
times in three decades. Other forms of technological change are more subtle, as is the case when a firm adjusts its production process to reduce waste and increase output.

We distinguish pro-ass innovation, which occurs when new engineering knowledge improves production techniques for existing products. from product invalidism. whereby new or improved products are introduced in the marketplace, For example. process innovation allows firms to produce more output with the lame inputs or to produce the same output with fewer inputs. In other words, a process innovation is equivalent to a shift in the production function.

Figure 6-3 illustrates how technological change,  in the form of a process innovation, would shift the total product curve. The lower line represents the feasible output. or production function. for a particular industry in the year 1995. Suppose that productivity, or output per unit of input, in this industry is rising at 4 percent per year. If we return to the same industry a decade later, we would likely see that 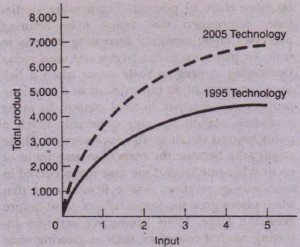 figure 6-3. Technological Change Shifts Production Function Upward The solid line represents maximum producible output for
each level of inputs given the slate of technical knowledge in 1995. ~ a result of improvements in computer technology and management practices, technological change shifts the production function upward, here allowing 50 percent greater output to be produced in 2005 for each 1C\’e1of inputs.

Changes in technical and engineering knowledge nave led to an almost 50 percent improvement in output per unit of input [(1 + .04) 10 = 1.48]. Next consider product innovations, which involve new or improved product s. It is much more dif- Iicult to quantify the importance of product innovations. but they may be even more important in raising living standards than process innovations. Today’s arrdY of goods and services is clearly far different from what prevailed just 50 years ago. In producing this
textbook. the authors used computer software. microprocessors.  color monitors. and databases that were not available when the previous edition waswritten. Medicine, communications. and entertainment are other areas where product innovations have been  critical. The whole area of the Internet, from e-commerceto e-mail, was not found even in science fiction literature 20 years ago. For fun, and to see this point. try to find any commodity or production process that has not changed since your grandparents
were your age Figure 6-3 shows the happy case of a technological advance. Is the opposite case-technological regress-possible?

For a well-functioning ‘market economy, the answer is no. Indeed, that is one of the key advantages of a market economy over an economy ruled by government dictates or tradition. Inferior technologies tend to be discarded in a market economy, while more productive technologies are intruduced because they will increase the profits of the innovating firms. If. for example, someone invented an expensive new mousetrap that never caught a mouse. no profit-oriented firm would produce such a device: and if a poorly managed firm decided to produce it. rational consumers who lived in mouseink tcd hOUSe! would urely decline to buy it, Wellfunctioning markets innovate with better, not inferior, mousetraps and other goods and services. \\11en there are market failures, however, technological rcgre55might occur even in a market economy.

An unregulated company might introduce a socially ~teful process, say,dumping toxic wastes intoa stream, because the wasteful  process was cheaper to operate. But llu! t’t:01UnRicadvantage of inferior IICk- 1lologil’s (ames only berauJe Iht social CDStsof pollution are not included in Iht firm s calculations of ‘lie costs of ~ duaion. If pollution COSIS were included in a firm’s decisions, hy. for instance, strict liability rules or pollution taxes, the retrogressive process would no longer be profitable: In competitive markets, inferior products follow Neanderthals into extinction.