There is considerable unanimity among  economists about the usefulness. nay necessity, of taxation and fiscal policy for mobilizing resources for economic development in the under-developed countries. When development has proceeded to achieve a certain rate of growth, the level of savings by households and businesses rises sufficiently to meet the requirements of development. But in the early Magus, some measure of compulsion is necessary to compel the people to save  means of suitable taxation measures, because the rate of domestic savings is low and propensity to consume is very high.

Thus, taxation is an important method of increasing the volume of savings by restricting domestic consumption. Both direct and indirect taxes can plays part in augmenting the resources of the governments to he spent oil developmental activities . For achieving best results, taxes should be imposed on non-entrepreneurial incomes and luxury consumption. But the taxation of non-functional surplus may not yield a substantial volume of development finance. because most of the in .om of the vast majority of the people in an under-developed country is devoted to the Multidisciplinary of necessaries. Thus, the need to raise an adequate volume us development Finance makes it inevitable for the government to extend the coverage of indirect taxes to include the staple commodity of mass consumption. corrector, the taxation of agriculture has to play an important part in the mobilization of resources for MIC public sector in a developing economy.

Thus, taxation is the most important means available to the Stat for mobilizing nation’s resources for economic development. Its yield can be more accurately estimated and its economic effects can he better foreseen. It can he used to finance development With minimum adverse effects on economic stability. Hence. it i~ necessary to intensify the tax effort, especially because the savings arc meager and the rate or casual formation low, whereas the development requirements arc very large. 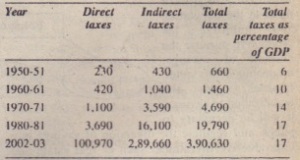 Thus. it is necessary tel devise a ta, system that will not weaken the incentives II. work, save and fauvist nor ill it violate the accepted notion of equity.

Tax policy of the government can exert a powerful influence both Oil savings and investment-the two crucial factors determining economic growth. The primary objective of the tax policy in the underdeveloped countries is to transfer from the community to the State as large a volume of resources as possible with minimum of adverse effects on incentives for production and investment, It is generally agreed that there is a considerable scope for broadening and deepening the tax system by improving .Ataxic structure and by toning up the tax machinery. A sound tax policy can provide incentives for private enterprise. Taxation can be used as means for controlling economic fluctuations, for containing inflationary pressures and to achieve social justice by reducing inequalities in income and wealth. These arc principal objectives of tax policy ill under-developed countries.