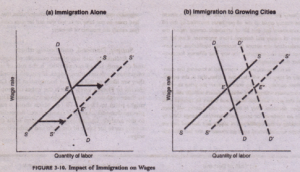 In (a). new immigrants cause the supply curve for labor to shift from SS to ‘S’S’. lowering equilibrium wages. But more often. immigrants go to cities with growing labor markets.Then. as shown in (b). the wage changes are small if the supply increase comes in labor markets with growing demand.Careful economic studies cast doubt on this simple reasoning. A recent survey of the evidence concludes:

(The) effect of immigration on the labor market outcomes of natives II small. There II no evidence of economically significant reductions in native employment. Most empirical analysis . , . finds that a’ 10 percent increase in the fraction of immigrants in ,he population reduce. native wages by at most 1 ‘percent

How can we explain the small impact of immigration on wages? Labor economists emphasize the high geographic mobility of the American population. This means than new immigrants will quickly spread around the entire country. Once they arrive, immigrants may move to cities where they can get jobs-s-workers tend to move to those cities where the demand for labor is already rising because of a strong local economy.

This point is illustrated in Figure 3-10 (b), where a shift in labor supply to S’ is associated with a higher demand curve, D’. The new equilibrium wage at E’ is !he same as the original wage at E. Another factor is that native-horn residents may move out when immigrants move in. so the total supply of labor is unchanged.This would lease the supply curve for labor in its original position and leave the wage unchanged.’

Immigration is a good example for demonstrating the power of the simple tools of supply and demand.

Let us now take stock of what the market mechanism accomplishes. By determining the equilibrium prices and quantities, the market all rations out the scarce goods of the society the possible uses. Who does the rationing?A planing board? Congress? The President? marketplace, through the interaction of  supply and demand, does the rationing. This is rationing by the purse.

For whom are goods produced? The power of the purse dictates the distribution of income and consumption.Those with higher incomes end up with larger houses, more clothing, and longer vacations..When backed up by cash, the most urgently felt needs get fulfilled through the demand curve.

Even the how question is decided by supply and demand. When com prices are low, it is not profitable for farmers to use expensive tractors and irrigation systems. When oil prices are high, oil companies drill in deep offshore waters and employ novel seismic techniques to find oil.

With this introduction to supply’ and demand, we begin to see how desires for goods, .as expressed through demands, interact with costs of goods, as re- . fleeted in supplies. Further study will deepen our understanding of these concepts and will show how these tools can be applied to other important areas.. But even this first survey will serve as an indispensable tool for interpreting the economic world in which we live.