Home » The Short-Run Trade-off between Inflation and Unem loyment » SHIFTS IN THE PHILLIPS CURVE: THE ROLE OF EXPECTATIONS

SHIFTS IN THE PHILLIPS CURVE: THE ROLE OF EXPECTATIONS Economics Assignment Help

SHIFTS IN THE PHILLIPS CURVE: THE ROLE OF EXPECTATIONS

The Phillips curve seems to offer policymakers a menu of possible inflation-unemployment outcomes. But does this menu of choices remain the same over time? Is the downward-sloping Phillips curve a stable relationship on which policymakers can rely? Economists took up these questions in the late 1960s, shortly after Samuelson and Solow had introduced the Phillips curve into the macroeconomic policy debate.

In 1968, economist Milton Friedman published a paper in the American Economic Review, based on an address he had recently given as president of the Amen can Economic Association. The paper, titled The Role of Monetary Policy,contained sections on “What Monetary Policy Can do and What Monetary Policy Cannot Do. Friedman argued that one thing monetary policy cannot do, other than for only a short time, is lower unemployment by raising inflation. At about the same time, another economist, Edmund Phelps, also published a paper denying the existence of a long-run trade-off between inflation and unemployment.

Friedman and Phelps based their conclusions on classical principles of macroeconomics. Classical theory points to growth in the money supply as the primary determinant of inflation. But classical theory also states that monetary growth does not affect real variables such as output and employment; it merely alters all prices and nominal incomes proportionately. In particular, monetary growth does not influence those factors that determine the economy’s unemployment rate, such as the market power of unions, the role of efficiency wages, or the process of job search. Friedman and Phelps concluded that there is no reason to think that the rate of inflation would, in the long run, be related to the rate of unemployment.

Here, in his own words, is Friedman’s view about what the Federal Reserve can hope to accomplish for the economy in the long run: 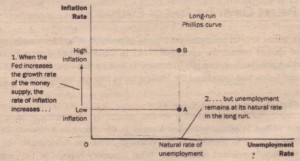 Panel (a) shows the model of aggregate demand and aggregate Supply a vertical aggregate-supply curve. When expansionary monetary policy shifts the aggregate-demand curve to the right from AD to AD2 the equilibrium moves from point A to point B. The price level rises from to P2 while output remains the same (b) shows the long-run Phillips curve, which is vertical  natural rate of unemployment. Expansionary monetary policy moves the economy from hyperinflation (point A) to higher inflation (point B) without changing the rate of unemployment.