Economists studying the economic history of the advanced nations have found that the following trends apply in most countries:

1. The capital stock has grown more rapidly than population and employment. resulting in capital deepening. ‘

2. For most of the twentieth century. there has been a strong upward trend in real average hourly earnings.

3. The share of labor compensation in national income has been remarkably stable over the last century.

4. There have been ‘major oscillations in real interest rates and the rate of profit. particularly during business cycles, but there was no strong upward or. downward trend in the twentieth century.

5. Instead of steadily rising,which would be predicted by the law of diminishing returns with unchanging technology, the capital-output ratio has actually declined since 1900.

6. For most of the twentieth century, the ratios of national saving and of investment tQ GDP were stable.Since 1980. the national saving rate has undecided.sharply in the United States.

7. After effects of the business cycle are rem<M!Cf. national,product has grown. at an average rate of close to 3 percent per ~r. Output growth has been much higher than a weighted averse of the growth of capital. labor, and resource inputs. suggesting that technological innovation must have played a key role in economic growth. 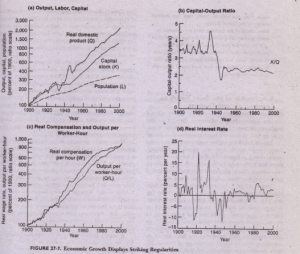 (a) The capital stock has grown faster than population and labor supply, ‘nonetheless, total output has grown even more rapidly than capital. (b) The capital-pour ratio declined sharply during the first half of the twentieth century but it has remained stead’ over the last five decades. (c) Real average houri)’ earnings have grown steadily and at the same rate as average product per worker-hour over the entire century, Note the slowdown of growth in output. real wages, and productivity since 1913, (d) The real interest rate has been tr endless over the twentieth cellulite. suggesting that technological change has offset diminishing returns to capital accumulation, (Source: U,S, Departments of Commerce and Labor, Federal Reserve Board, U.S, Bureau of the Census, and historical studies by John Kendrick.)