In Chapter 2, we noted that investment in capital goods involves indirect or roundabout production. Instead of catching fish with tour hands, we find it ultimately more worthwhile first to build boats and make nets-and then to use the boats and nets to catch many more fish than we could by hand.

Put differently, investment in capital goods involves forgoing present consumption to increase future consumption. Consuming less today frees labor for making nets to catch many more fish tomorrow. In the most general sense, capital is productive because by forgoing consumption today we get more consumption in the future. To see this, imagine two islands that are exactly alike.

Each has the same amount of labor and naturals resources. Island A uses these primary factors directly to produce consumption goods like food and clothing it uses no produced capital all By contrast, thrifty Island B sacrifices current gumption and use its resources and labor to produce capital goods, such as plows, shovels, and looms. After this temporary sacrifice of current consumption. B ends up with a large stock of capital goods. 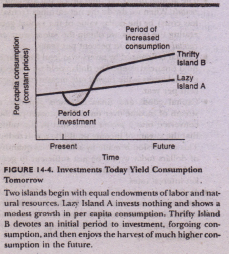