How does government fit into this picture? Governents are the’ major source of income for milJions f people. They employ about 16 percent of the nonagricultural workforce. In 1999, governments paid almost $262 billion in interest to holders of govten measure “income- in dif- ernment bonds and other debt. Moreover, rent millions of square feet of office space and are responsible, directly and indirectly. for billions in profits to corporations that do business with them.

All these direct payments to factors of production are reflected in Table 12-1. Yet government also has a direct role in incomes that does not show up in Table 12-1. To begin with.

The government collects a sizable share of national income through taxation and other levies. In 1999 about 30 percent of gross domestic product was collected by federal. state, and local governments as various t}pe5 of taxes, including personal income taxes. corporate-profit taxes. and social security taxes. But what governments tax, they also spend or give away. Governments at all levels provide incomes in the form of transfer payments, which are payments by governments to individuals that are not made in return for current goods or services, 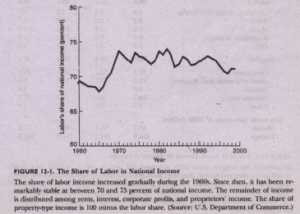