In Calais-Zaire economic system the government plays only a passive role. It is concerned with only the basic activities or a police state, Activities such as protection of citizens from external aggression. maintenance of internal law and order, administration and provides certain basic inf~structures. In the welfare capitalism the government plays an active role so as to provide the economic stability and maintenance of full employment along with the basic function (as in the case of Calais-fair economy) through the use of monetary and fiscal policies. In Authoritarian Socialism the government takes complete control of the economy. Where only certain basic freedoms arc allowed the rest of economic freedoms are not allowed and, all economic decisions are made by the government or the state. In Communism the government is in complete command of all economic activities to a greater extent complete qualities of income and wealth is achieved. The aim of the government in almost all the economic systems are to achieve maximum social and economic welfare. Economic welfare is at the root of social welfare. No government in the world can survive if they ore unable to get the maximum economic and social welfare fur the people. 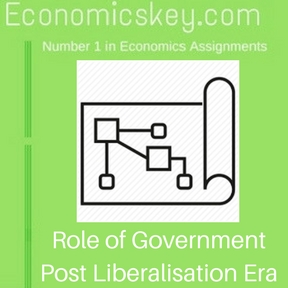 In India soon after independence the government under Prime Minister Nehru followed a concourse a mixed economic policy, in which the government to a greater extent played some what direct role in achieving the desired economic and social
welfare. The government introduced many industrial policies under which the industrial development was given priority as well as a dynamic role was assigned to public sector. In 1950 National Development Council was formed and the planning
commission was established. Government opted for planned economic development on the lines of Russian experience. but our planning was that of decentralized planning as well as induced planning

Preservationist started as the government announced the opening of airways industry to private sector. In 1991 as the government, took the step towards liberalization and globalization and the Indian economy was declared open as a part of the global economy, Disinvestment policy in public sector, more liberal monetary reforms under the chairmanship of Narcissism a former overbidding. more liberal now of foreign capital including Nil’s deposits, and so on

Many multinationals and transnationals were allowed to open their economic installations in the country. It is said.that in 1992-93 the  of foreign money is equal to that of the total amount borrowed from 1950’s to 1992-93. Me Donald, Coriolanus. Wall’s Environs, Contingent, Fords, General Motors, Clogs etc. entered the economy. The main objectives of the government was

(i) To obtain foreign capitalization investment.

(ii) To get the benefits of foreign capital in the form of quality products, technology etc.

(ill) To achieve certain determined economic objective in the form of employment. income generation as well as infra-structure development. If we get these objectives, then the liberalization and globalization policy is the best, but this raises certain questions regarding the present role of government.

(i) Social responsibility of the government,

(ii) Profit as the only criteria of judging efficiency of an organisation,

(iii) Widening, inequalities of income and wealth and upper rich are getting very rich.

(I’) Threat to India’s own culture,