Another way the govemment deals with the problem of monopoly is by regulating the behavior of monopolists. This solution is common in the case of natural monopolies, such as water and electric companies. These companies are not allowed to charge any price they want. Instead, government agencies regulate their prices.

Regulators an respond to this problem in various ways, none of. which is perfect.’ One way is to subsidize the monopolist. In essence, the government picks up the losses inherent in marginal-cost pricing. Yet to pay for the subsidy, the government needs to raise money through taxation, which involves its own deadweight losses. Alternatively, the regulators can allow the monopolist to charge a price higher than marginal cost. If the regulated price equals average total cost, the monopolist earns exactly zero economic profit. Yet average-cost pricing leads to deadweight losses because the monopolist’s price no longer reflects the marginal cost of producing the good. In essence, average-cost pricing is like a tax on the good the monopolist is selling. 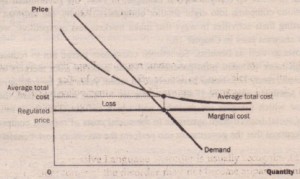