Properties of Equal Product Cline s
Properties of iso-product curves arc the same as those of indifference curves. Their properties can also be proved in the same manner as in the case of indifference curves. (See the relevant diagrams pp. 54- 56). The following arc the mispronunciations of iso product curves:
(i) Downwards Iso-product curves slope downwards from left to right. This is so because if the quantity of a factor X is increased, the quantity of factor Y must be decreased so as to maintain the same level of output.
ln the figure 19.4 on y-axis, K (capital) and x-axis ‘L’ (Labour) IS quarts are negative sloping that means as the increase in one more unit-of ‘L’ than we have to decrease certain amount of capital (K). Due to this the iso-quant curve slopes down word from left to right. In other words it has a negative slope. 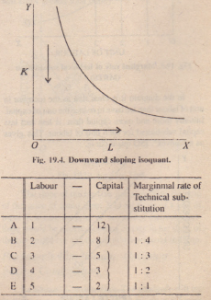 lso-product curves are convex to 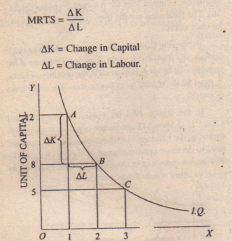 In the diagram it is clear that as the increase in unit of labour than we have to reduce the unit of capital. Initially more and more capital than is less and less capital substituted for each unit of labour. This gives us a ‘convex’. ISO quant curve. 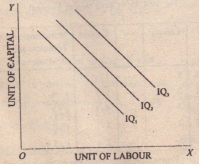 Thus. it is the diminishing marginal rate of substitution which is a realistic phenomenon and due to which the iso-product curves are convex to the origin 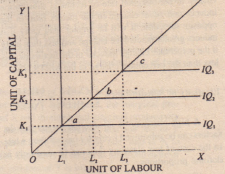 However, there are two exceptions to the rule that equal product curves are convex to the origin: 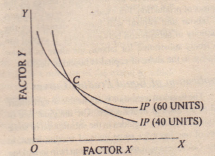 (n) Perfect Substituted. When the factors of production are perfect substitutes. then one factor can completely take the place of the other. They may, in fact, be regarded as one factor. In their case, the marginal rate of technical substitution is constant. Hence, the equal product curves will be a horizontal straight line instead of being convex to the origin. (b) Complem nl s, The complementary factors are those which are jointly used in production in a fixed proportion. If one of these factors is increased, the other must also be increased at the same time, otherwise no additional output win be obtained. In his case, the equal product curves Will be right angled (i.e., one of the two arms being vertical  and the other horizontal) at the combination of the two factors used in fixed proportion. 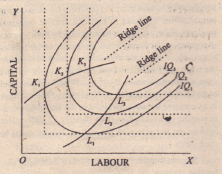