Home » The Design of the Tax System » PROBLEMS AND APPLICATIONS

The Design of the Tax System

1. In a published source or on the Internet, find out whether the U.S. federal government had a budget deficit or surplus last year. What do policymakers expect to happen over the next few years? (Hint: The website of the Congressional Budget Office is hnp:/www.cbo.gov.)

2. The information in many of the tables in this chapter can be found in the Economic Report of the President, which appears annually. Using a recent issue of the report at your library or on the Internet, answer the following questions and provide some numbers to support your answers. (Hint: The website of the government printing office is http:/www.gpo.gov.)

b. Looking at the combined revenue of the federal government and state and local governments, how· has the composition of total revenue changed over time? Are personal income taxes more or less important? Social insurance taxes? Corporate profits taxes?

3. The chapter states that the elderly population in the United States is growing more rapidly than the total population. In particular, the number of workers is rising slowly, while the number of retirees is rising quickly. Concerned about the future of Social Security, some members of Congress propose. a freeze on the program.

a. If total expenditures were frozen, what would happen to benefits per retiree? To tax payments per  worker? (Assume that Social Security taxes and receipts are balanced in each year.)

b. If benefits per retiree were frozen, what would happen to total expenditures? To tax payments per worker?

4. Suppose you pay 6 percent of your income in a state income tax and 17 percent of your labor earnings in federal payroll taxes (employer and employee shares combined). You also pay federal income taxes as in Table 3. How much tax of each type do you pay if you earn $30,000 a year? Taking all taxes into account, what are your average and marginal tax rates? What happens to your tax bill and average and marginal tax rates if your income rises to $50,000?

5. Some states exclude necessities, such as food and clothing, from their sales tax. Other states do not. Discuss the merits of this exclusion. Consider both efficiency and equity.

6. When someone owns In asset (such as a share of stock) that rises in value, he has an accrued capital gain. If he sells the asset, he “realizes” the gains that have previously accrued. Under the U.S. income tax, realized capital gains are taxed, but accrued gains are not.

a. Explain how individuals’ behavior is affected by this rule.

b. Some economists believe that cuts in capital gains tax rates, especially temporary ones, can raise tax revenue. How might this be so?

7. Suppose that your state raises its sales tax from 5 percent to 6 percent. The state revenue commissioner forecasts a 20 percent increase in sales tax revenue. Is this plausible? Explain.

8. The Tax Reform Act of 1986 eliminated the destructibility of interest payments on consumer debt I (mostly credit cards and auto loans) but maintained the destructibility of interest payments on mortgages and home~equity loans. What do you think happened to the relative amounts of borrowing through consumer debt and home equity debt?

9. Categorize each of the following funding schemes as examples of the benefits principle or the ability to pay principle.

a. The federal income tax is progressive.

b. The federal government charges an excise tax OJ! every gallon of gasoline sold, which is used to fund highway construction and maintenance.

c. Many state and federal highways charge tolls to drivers. . 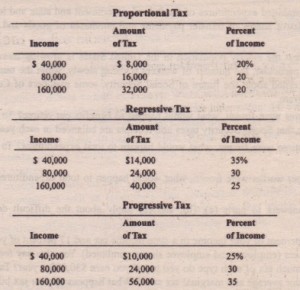 1L Use the data in Table 8 to answer these questions about the U.S tax system:

a. For each quintile, compute the federal taxes paid by the typical taxpayer.

12. Each of the following expenditures is a deduction for the purposes of calculating a person’s federal income tax liability.

b. State and local taxes

More from Category: The Design of the Tax System