1. Among monopoly, oligopoly, monopolistic competition, and perfect competition, how would you classify the markets for each of the following drinks?

2. The New York Times (Nov. 30, 1993) reported that “the inability of OPEC to agree last week to cut production has sent the oil market into turmoil leading to) the lowest price for domestic crude oil since June 1990.

a. Why were the members of OPEC trying to agree to cut production?

b. Why do you suppose OPEC was unable to agree on cutting production? Why did the oil market go into turmoil as a result

3. A large share of the world supply of diamonds comes from Russia and South Africa. Suppose that the marginal cost of mining diamonds is constant at $1,000 per diamond, and the demand for diamonds is described by the following schedule. 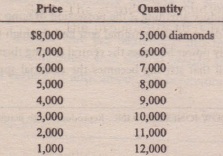 a. If there were many suppliers of diamonds, what would be the price and quantity?

b. If there were only one supplier of diamonds, would be- the price and quantity?

b. Major league baseball team owners have an oligopoly in the market for baseball players. What is the owners’ goal regarding players’ salaries? Why is this goal difficult to achieve?

5. Consider trade relations between the United States and Mexico. Assume that the leaders of the two – countries believe the payoffs to alternative trade policies are as follows:

a. What is the dominant strategy for the United States? For Mexico? Explain?

6. You and a classmate are assigned a project on which you will receive one combined grade. You each want to receive a good grade, but you also want to avoid hard work. In particular, here is the situation:

• If both of you work hard, you both get an A, which gives each of you 40 units of happiness .

• If only one of you works hard, you both get a B, which gives each of you 30 units of happiness.

• If neither of you works hard, you both get a D, which gives each of you 10 units of happiness.

a. Fill in the payoffs in the following decision box:

b. What is the likely outcome? Explain your answer.

a. Draw the decision box for this game.

b. What is the Nash equilibrium in this game? Explain

8. Farmer Jones and Farmer Smith graze their cattle on the same field. If there are 20 cows grazing in the field, each cow produces $4,000 of milk over its lifetime.

a. Assume that Farmer Jones and Farmer Smith can each purchase either 10 or 20 cows
neither knows how many the other is buying when she makes her purchase. Calculate of each outcome.

b. What is the likely outcome of this game? What would be the best outcome? Explain.

9. Little Kona is a small coffee company that is considering entering a market dominated by Big Brew.

a. Does either player in this game have a dominant strategy?

b. Does you! answer to part (a) help you figure out what the other player should do?

10. Jeff and Steve are playing tennis. Every point  down to whether Steve guesses correctly whether Jeff will hit the ball to Steve’s left or right.

11. Let’s return to the chapter’s discussion of the Jack and water duopoly. Suppose that Jack and Jill are at the duopoly’s Nash equilibrium (80 gallons) when a third person, John, discovers a water source and joins the market as a third producer

.
. a. Jack and Jill propose that the three of them continue to Produce a total of 89 gallons, splitting the market three ways. If John agrees to this, how much profit will he make?

b.Agreeing to the proposed deal, John is considering increasing his production l?y 10 gallons. If p.e does, and Jack and Jill stick to the agreement, how much profit will John make? What does this tell you about the proposed agreement?