Potential GDP represents the maximum-amount is the economy can produce while maintaining price stability, ‘Potential output is also some times called the empowerment level of output. When arr economy is operative at its potential, unemployment is low and production is high Potential output is determined. by the economy productive capacity, which depends upon the inputs available .(capital, ‘labor, land, etc.) ‘and the. technological efficiency. Potential.GDP tends to grow slowly and steadily because’ inputs like labor and capital and the-level of technology change quite slowly over time. By contrast, actual GDP is subject to large business cycle swings if spending patterns change sharply. Economic policies (like monetary and fiscal policy) can affect actual output quickly, but the impact of policies on potential output trends operates slowly over a number of years.

During business downturns, actual GDP is below its potential and unemployment rises. In 1982, for example, the U.S. economy produced m~re than $400 billion less than potential output. This represented $6000 lost per family durum a single year. Economic downturns are called recessions when real output declines for a year or two. A and protracted downturn is called a Output can be temporarily above potential output during booms and wartime as capacity limits are strained. but the high utilization rates bring rising inflation and are usually brought to an end by monetary or fiscal policy.

Figure 20-2 on page 418 shows the estimated potential and actual output for the period 1930-1999. Note how large the gap between actual and potential output was during the Great Depression of the 130s. 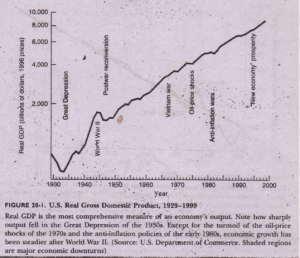