Suppose that Congress passed a tax reform aimed at making investment more attractive. In essence, this is what Congress does when it institutes an investment tax credit, which it does from time to time. An investment tax credit gives a tax advantage to any firm building a new factory or buying a new piece of equipment. Let’s consider the effect of such a tax reform on the market for loan able funds, as illustrated in Figure 3. 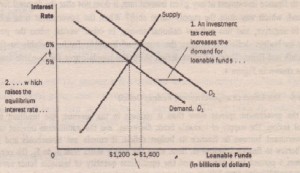