American families save a smaller fraction of their incomes than their counterparts in many other countries, such as Japan and Germany. Although the reasons for these international differences are unclear, many US. policymakers view the low level of US. saving as a major problem. One of the Ten Principles of Economics in Chapter 1 is that a country’s standard of living depends on its ability to produce goods and services. And as we discussed in the preceding chapter, saving is an important long-run determinant of a nation’s productivity. If the United States could somehow raise its saving rate to the level that prevails in other countries, the growth rate of GDP would increase, and over time, US. citizens would- enjoy a higher standard of living Another of the Ten Principles of Economics is that people respond to incentives. Many economists have used this principle to suggest that the low saving rate in the United States is at least partly attributable to tax laws that discourage saving. The US. federal government, as well as many state governments, collects revenue by taxing income, including interest and dividend income. To see the effects of this policy, consider a 25-year-old who saves $1,000 and buys a 30-year bond that pays an interest rate of 9 percent. In the absence of taxes, the $1,000 grows to $13,268 when the individual reaches age 55. Yet if that interest is taxed at a rate of, say, 33 percent, then the after-tax interest rate is only 6 percent. In this case, the $1,000 grows to only $5,743 after 30 years. The tax on interest income substantially reduces the future pay off from current saving and, as a result, reduces the incentive for people to save In response to this problem, many economists and lawmakers have proposed reforming the tax code to encourage greater saving. For example, one proposal is to expand eligibility for special accounts, such as Individual Retirement Accounts, that allow people to shelter some of their saving from taxation. Let’s consider the effect of such a saving incentive on the market for loan able funds, as illustrated in Figure 2. We analyze this policy following our three steps. First, which curve would this policy affect? Because the tax change would alter the incentive for households to save at any given interest rate, it would affect the quantity of loan able funds supplied at each interest rate. Thus, the supply of loan able funds would shift. The demand for loan able funds would remain the same because the tax change would not directly affect the amount that borrowers want to borrow at any given interest rate Second, which way would the supply curve shift? Because saving would be taxed less heavily than under current law, households would increase their saving by consuming a smaller fraction of their income. Households would use this additional saving to increase their deposits in banks or to buy more bonds. The supply of loan able funds would increase, and the supply curve would shift to the right from SI to S2 as shown in Figure 2. 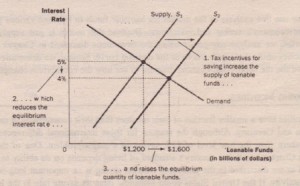 Finally, we can compare the old and new equilibrium. In the figure, the increased supply of loan able funds reduces the interest rate from 5 percent to 4 percent. The lower interest rate raises the quantity of loan able funds demanded from $1,200 billion to $1,600 billion. That is, the shift in the supply curve moves the market equilibrium along the demand curve. With a lower cost of borrowing, households and firms are motivated to borrow more to finance greater investment. Thus, if a reform of the tax laws encouraged greater saving, the result would be lower interest rates and greater investment.
Although this analysis of the effects of increased saving is widely accepted among economists, there is less consensus about what kinds of tax changes should be enacted. Many economists endorse tax reform aimed at increasing saving to stimulate investment and growth. Yet others are skeptical that these tax changes would have much effect on national saving. These skeptics also doubt the equity of the proposed reforms. They argue that, in many cases, the benefits of the tax changes would accrue primarily to the wealthy, who are least in need of tax relief.