ORIGINS OF THE PHILIPS CURVE

In 1958, economist A. W Phillips published an article in the British journal Economics that would make him famous. The article was titled.The Relationship between Unemployment and the Rate of Change of Money Wages in the United Kingdom, 1861-1957. In it, Phillips showed a negative correlation between the rate of unemployment and the rate of inflation. That is, Phillips showed that years with low unemployment tend to have high inflation, and years with high unemployment tend to have low inflation. (Phillips examined inflation in nominal wages rather than inflation in prices, but for our purposes, that distinction is not important. These two measures of inflation usually move together.) Phillips concluded that two important macroeconomic variables inflation and unemployment-were linked in a way that economists had not previously appreciated.

Although Phillips’s discovery was based on data for the United Kingdom, researchers quickly extended his finding to other countries. Two years after Phillips published his article, economists Paul Samuelson and Robert Solow published an article in the American Economic Review called Analytics of Anti- Inflation Policy in which they showed a similar negative correlation between inflation and unemployment in data for the United States. They reasoned that this correlation arose because low unemployment was associated with high aggregate demand, which in turn puts upward pressure on wages and prices throughout the economy. Samuelson and Solow dubbed the negative association between inflation and unemployment the Phillips curve. Figure 1 shows an example of a Phillips curve like the one round by Samuelson and Solow. 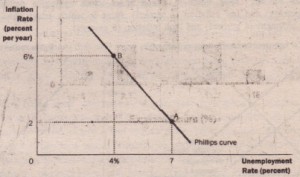