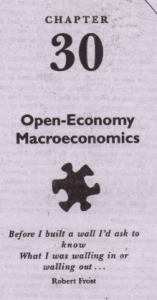 Today is the era of the global economy. Revolutionary developments in communications, transportation, and trade policy have increasingly linked together the economic fortunes of nations. Trading ties among Japan, Mexico, Canada, and the United States are closer today than were those between New York and California a century ago. The ‘international business cycle exerts a powerful effect on every nation of the globe. American monetary policy can produce depressions, poverty, and revolutions in South America, Political disturbances in the Middle East can set off a spiral in oil prices that .sends the world into recessions, Revolution or default in Russia can rock stock, markets around the world. To ignore international trade is to miss half the economic ball game. The last chapter surveyed the major concepts of international macroeconomics-the balance of payments, the determination of exchange rates, and the international monetary system. The present chapter continues the story by showing how macroeconomic shocks in one country have ripple effects on the output and employment of other countries and examining the linkage between domestic saving .and investment and, the trade balance. The chapter concludes with a review of some of the key international issues of today.