An industry is a natural monopoly when a single firm can supply a good or service to an entire market at a lower cost than could two or more firms. A natural monopoly arises when there are economies of scale over the relevant range of output. Figure 1 shows the average total costs of a firm with economies of scale. In this case, a single firm can produce any amount of output at least cost. That is, for any given amount-of output, a larger number of firms leads to less output per firm and higher average total cost.

Figure 1 Econsmies of Scale as a Cause of Monopoly 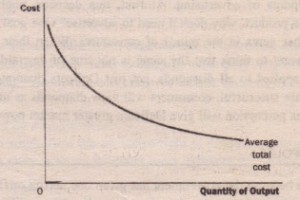 We saw other examples of natural monopolies when we discussed public goods and common resources in Chapter 11. We noted in passing that some goods are excusable but not rival in consumption. An example is a bridge used so infrequently that it is never congested. The bridge is excusable because a toll collector can prevent someone from using it. The bridge is not rival in consumption because use of the bridge by one person does not diminish the ability of others to use it. Because there is a fixed cost of building the bridge and a negligible marginal cost of additional users, the average total cost of a trip across the bridge (the total cost divided by the number of trips) falls as the number of trips rises. Hence, the bridge is a natural monopoly.  When a firm is a ‘natural monopoly, it is less concerned about new entrants eroding its monopoly power.

Normally, a firm has trouble maintaining a monopoly position without ownership of a key resource or protection from the government. The monopolist’s profit attracts entrants into the market, and these entrants make the market more competitive. By contrast, entering a market in which another firm has a natural monopoly is unattractive. Would-be entrants know that they cannot achieve the same low costs that the monopolist enjoys because, after entry, each firm would have a smaller piece of the market.

In some cases, the size of the market is one determinant of whether an industry is a natural monopoly. Again, consider a bridge across a river. When the population is small, the bridge may be a natural monopoly. A single bridge can satisfy the entire demand for trips across the river at lowest cost. Yet as the population grows. and the bridge becomes congested, satisfying the entire demand may require two or more bridges across the same river. Thus, as a market expands, a natural monopoly can evolve into a competitive market.