Monopolistic competition is very common-just scan the shelves at any supermarket and you’ll see a dizzying array of different brands of breakfast cereals, shampoos, and frozen foods. Within each product group, products or services are different, but close enough to compete with each other. Here are some other examples ‘of monopolistic competition: There ‘may be several grocery stores in a neighborhood, each carrying the same goods but at differen t locations. Gas stations, (00, all sell the same product, but they com: pete on the basis of location and brand name. The several hundred magazines on a newsstand rack are. monopolistic competitors, as are the 50 or so competing brands of personal computers. The list is endless. For our analysis, the important point is that product differentiation means each seller has some freedom to raise or lower prices, more ‘so than in a perfectly competitive market. Product differentiation leads 10 a downward slope ill earli seller’s demand curve. Figure 10-3 might represent a monopolistically competitive fishing magazine which is in short-run equilibrium at G. The firm’s dd demand curve hows the relationship between sales and its price when other magazine prices are ‘unchanged; its demand curve slopes downward since this magazine is a little different from everyone else’s because of its special focus.

The profit-maximizing price is at G. Because price at ‘G is above average cost. the firm is making a handsome profit represented by area MGC. But our magazine has no monopoly on writers or newsprint or insights on fjshing. Firms can enter the industry by hiring an editor. having a bright ‘new idea and logo, locating a printer, and hiring workers. Since the fishing magazine industry is profitable. entrepreneurs bring new fishing ‘magazines into the market. With their introduction, the demand curve for the products of existing monopolistically COI11- petitive fishing magazines shifts leftward as the new , magazines nibble away at our magazine’s market.

The ~himate outcome is that fishing magazines will,conunue to enter the market until all economic ” profits (including the appropriate opportunity costs for owners’ time. talent. and’ contributed capital) have been beaten down to zero. Figure 10-4 shows the final long-run equilibrium for the typical seller. In equilibrium. the demand is reduced or shifted to the left until the new tf tf demand curve just touches (but never goes above) the firm’s AC curve. Point G is a long-run, equilibrium for the industry because- ‘profits are zero and no one is tempted to enter or forced to exit the industry. This analysis ill well illustrated by the personal computer industry. Originally. such computer manufacturers as Apple and Compaq made big profits.

But the personal computer industry turned out to have low barriers to entry. and numerous small firms entered the market. Today. there are dozens of firms. each with a small share of the computer market but no economic profits to show for its efforts.
The monopolistic’ competition model provides an important insight into American capitalism: The rate of profit will in the long run be zero hi this kind of imperfectly competitive industry as firms enter with new differentiated products. In the, long-run equilibrium for monopolistic competition. prices are above marginal costs but economic profits have been driven down to zero. Some critics believe that monopolistic competition is inherently inefficient; even though profits are zero in the long run. They argue that monopolistic competition breeds an excessive number of . new products and that eliminating unnecessary product, differentiation could really cut costs and lower prices. To understand their reasoning. look back at the long-run equilibrium price at.C in Figure 10-4. At that point. price is above marginal cost; hence. output is reduced below the ideal competitive level.

This argument against monopolistic competition has considerable appeal. It takes real ingenuity to demonstrate the gains to human welfare from adding Apple Cinnamon Cheerios to Honey Nut Cheerios and Whole Grain Cheerios. ,It is sometimes hard to, see the reason for gasoline stations on every corner of an intersection. But there is strong logic to the incredible variety we find in the American economy. Reducing the number of monopolistic competitors. while cutting costs, might well end up lowering consumer welfare because it would reduce the diversity of available goods and services. Centrally planned socialist countries tried to standardize output to a small number of varieties. and this left their consumers highly dissatisfied. People will pay a great deal to be free to choose. 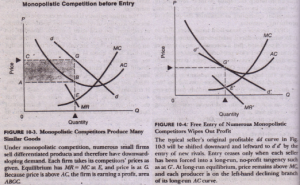