When you walk into a restaurant to buy a meal, you get somet~g of value-a full stomach. To pay for this service, you might hand the restaurateur several worn-out pieces of greenish paper decorated with strange symbols; government buildings, and the portraits of famous dead Americans. Or you might hand’ him a single piece of paper with the name of a bank and your signature. Whether you pay by cash or check. the hard to satisfy your gastronomical desires in exchange for these pieces of paper which, in and of themselves, are worthless. To anyone who has lived in a modern economy, this social custom is not at all odd. Even though paper money has no intrinsic value, the restaurateur is confident that, in the future, some third person will accept It In exchange for something that the restaurateur does value. And ..that third person is confident that some fourth person will accept the money, with the knowledge that yet a fifth person will accept the money and so on. To the restaurateur and to other people in our society, your cash or check represents a claim to goods and services in the future. The social custom of using money for transactions is extraordinarily useful in a large, complex society.’ Imagine, for a moment, that there was no item in the economy widely accepted in exchange for goods and services. People would have to rely on barter-the exchange of one good or service for another-to obtain the things they need. To get your restaurant meal, for instance, you would have to offer the restaurateur something of immediate value. You could offer to wash some dishes, clean his car, or give him your family’s secret recipe for meat loaf. 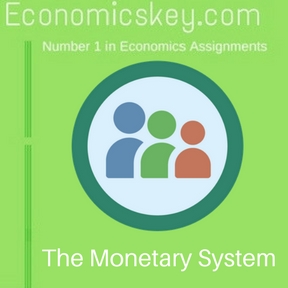 An economy that relies on barter will have trouble allocating its scarce resources efficiently. In such an economy, trade is said to require the double coincidence of wants-the unlikely occurrence that two people each have a’ good or service that the other wants. The existence of money makestrade easier. The restaurateur does not care whether you can produce valuable good or service for him. He is happy to accept your money, knowing that other people will do the same for him. Such a convention allows trade to be roundabout: The restaurateur accepts your-money and uses it to pay his chef; the chef uses her paycheck to send her child to day care; the day care center uses this tuition to pay a teacher; and the teacher hires you to mow his lawn. As money iio~s from person to person in the economy, it facilitates production and trade, thereby allowing each person to specialize in what he or she does best and raising everyone’s standard of living. In this chapter, we begin to examine the role of money in the economy. We discuss what money is, the various forms that money takes, how the banking system helps create money, and how the government.

More from Category: FACTOR OF PRODUCTION